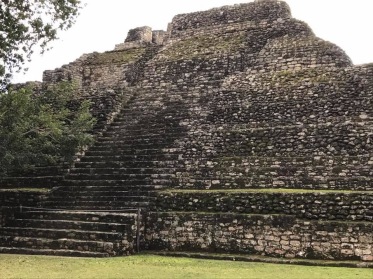 I finally managed a good night of sleep, so I awoke for our day in Costa Maya feeling refreshed. We were up by 7:30, and since our tour wasn’t set to leave until 10:00, we had enough time to forego the hectic buffet for a more leisurely breakfast at O’Sheehan’s. We both enjoyed the food, and really enjoyed avoiding the crowds at the buffet. Breakfast took roughly 45 minutes, which gave us more than enough time to head back to our cabin and get sunscreened and bug sprayed in advance of our day in Costa Maya.

Following the always excellent advice I find on Cruise Critic, I decided to book a tour of the Chacchoben Ruins through Native Choice. The price was $55 per person, which I think was around half the cost of doing a tour through NCL.

Our tour was set to leave at 10:00, so we got off the ship at about 9:15, since we weren’t sure exactly how long it would take us to walk to the Native Choice office. When you book with Native Choice, they email you helpful step-by-step directions to their office, along with a handy map. We are both a little directionally challenged, but we managed to make it to their office without a problem.

The pier in Costa Maya is a bit lengthy, so it took us about half an hour to walk to the Native Choice building. We arrived just in time to quickly use the bathroom, grab a nice cold bottle of water, and hop on the van for the drive to the ruins.

One thing we really liked about Native Choice was the small size of the tour group. We were in a small van that sat about 15 people, and our tour guide was able to converse with everyone quite easily, which made everything more conversational than your typical narrated bus tour.

The drive to the ruins takes about an hour. Our tour guide, Edder, filled the time by giving us a great overview of the area. He was very knowledgeable and the hour drive went by very fast.

When we arrived at the ruins, Edder took us on a great walking tour that lasted about two hours. He gave an excellent tour of the ruins, as well as a great overview of the Mayan culture generally. This was our first time touring ruins, and we both really enjoyed the experience.

We made it back to the ship by about 2:30. My only complaint with this tour is it’s a bit long to go without lunch, as we hadn’t eaten since 8:30 that morning. So our first order of business upon our return to the ship was to grab a bite.

We decided to grab a quick bite at Topsiders, which is near the pool on deck 12. I’ve read that the Dawn used to actually have grills near the pool area, which would have been really fun and delicious. Unfortunately, the food from Topsiders was the only meal on the cruise we didn’t enjoy. I tried a burger and a chicken breast, and Kathleen tried a burger and a sausage. Everything was very unremarkable, and on a ship with delicious food pretty much everywhere, I regretted wasting any belly room on such average fare.

After a quick stop back to our cabin to shower and change, we roamed back up to deck 13 for an afternoon drink at Bimini Grill, which—when the wind isn’t blowing like crazy—is a great spot for enjoying a drink as the ship leaves port. Feeling a bit sunned-out for the day, we finished off our drinks pretty quickly and headed back in to the nice cool air-conditioning.

We brought a fresh round of drinks with us down to the Bliss Lounge, where we were eager to defend our title in another round of music trivia. Today’s trivia was Broadway songs, and I am proud to say that we won again! We collected more participation signatures, but whatever prize awaited us at the end could not compete with the thrill and rush of victory.

We had no dinner plans for the evening, but since we’d eaten a later lunch, neither one of us felt like eating quite yet. We did, however, have a hunger for another Tropical Paloma, so we stopped in and chatted with Rodell and enjoyed some nice conversation, and some nice alcohol.

Next, we headed down to Bliss to hear the Dawn Show Band. This turned out to be really excellent. Even though the Daily said “Ballroom Music,” think jazz standards, not slow waltzes. As I’ve mentioned, the jazz band was very good, so I highly recommend checking them out, especially when they play in Bliss minus the singers and dancers.

We hung out in Bliss for a while, because after their set of standards, the Show Band did a tribute to Glenn Miller. I played most of those songs in high school jazz band, so I really enjoyed this set.

The jazz rapped up just in time for us to beeline across deck 7 to the theater to catch a comedy show with the onboard comedian, Julie Barr. She was funny, but not quite as funny as the drunk people sitting next to us. Their over-exaggerated laughter at everything the comedian said had me laughing more than the comedian. It was a fun 45 minutes.

Our hunger had finally resurfaced, so we went to O’Sheehan’s for a late-night bite. Okay, late for us at any rate. The food was great, as always, but the atmosphere left something to be desired, to put it mildly.

This particular evening, Sunday Night Football was on at the bar. This is not usually a problem, as I like football as much as the next guy. But the people at the bar that night were an absolute nightmare. It was only about a dozen people, but they were screaming and carrying on to such an extent that it was impossible to enjoy sitting and having a meal. And when I say screaming, I don’t mean the occasional exclamation of joy, I mean full-on, top of your lungs screaming, that never stopped, for like 40 minutes. Assholes.

Now, I get it. People are on a cruise and having a good time. But, to me, that doesn’t mean you leave normal behavior and basic human decency back on land. These people were so annoying and so loud, they not only made it impossible to have a conversation, but they made it so you couldn’t even hear the music down in the atrium. I was not a happy camper, so we finished our food as fast as possible and immediately sought quieter pastures.

My rage now down to a simmer, we headed down to Gatsby’s for a final drink. We listened to a little piano music and decompressed. We then grabbed a glass of wine, which we took back and enjoyed on our nice, quiet balcony before heading to sleep.

Up next in cruise day 4: we’re not very impressed with NCL’s brand new private island.