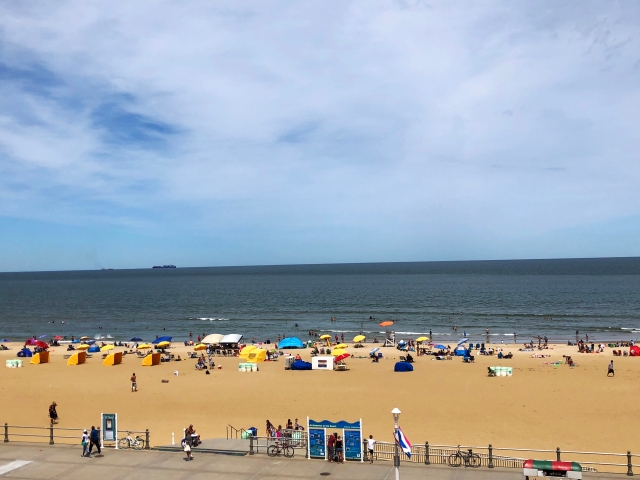 “I want a rich, young, dumb nymphomaniac!” roared the performer at Murphy’s Irish Pub, alongside his ham-fisted thwacking at the guitar strings. The close-knit crowd gleefully crowed along in unison, as Paul and I stared uncomfortably into our drinks. We learned the performer was a long-time friend of the bar owner and he shared his disgusting sexist, racist jokes and songs at this location on a regular basis. This was our second night in VA Beach and so far we’d yet to experience the kinds of scenes my co-workers had warned me about. “You’re not going to like it,” they said. “It’s…trashy.”

With some notable exceptions–the loud, drunken boorish bar behavior at Murphy’s, or a table of wealthy, entitled Trumpers happily dissecting the separation of families and the internment of children at our border–we really enjoyed our time in VA Beach. We didn’t find it particularly trashy. Not as swanky as Rehobeth, not as young as Dewey, we found VA Beach to be a more diverse group of beachgoers, racially, ethnically, and economically. We found there was something for everyone—from family-friendly arcades, to local-yokel racist bargoers, to upscale brunches. Check out our travelogue below to see where to eat and drink, and where not to eat and drink, during your Virginia Beach vacation.

We departed for Virginia Beach early on a Friday morning to try and beat the traffic. Our first stop, before we even saw the waves or stopped at the hotel, was, naturally, food. Drawn by the promise of fried clam bellies, I was determined to dine at the very niche restaurant, A Bite of Maine. Complete with “red snapper” hot dogs and Moxie, this is a joint that would make a displaced Mainer proud.

We feasted on poutine fries (apparently a nod to our neighbors to the [farther] North), fried clam bellies, lobster rolls, and the famous bright hot dogs. The clams and juicy hotdogs with their distinctive bite made us feel like side characters in a Stephen King novel, while the fries and lobster roll left a little-to-be-desired.

Full, but with my Maine fix not yet fully sated, I bought 3 whoopie pies for the road. Huge circles of red velvet, chocolate, and cookie dough cakes sandwiched tooth achingly sweet frosting. Heaven.

As we pulled into the Visitor’s Center, we realized our GPS had shit the bed. I’m completely directionally-challenged; my blind husband has a much better sense of where we are and how to get where we need to go on any given day than I do, and so we envisioned a VERY long and confusing trip ahead of us. A quick Google search revealed Apple maps was experiencing major functionality issues and we’d be navigating by instinct for a little while. We made it to the hotel, where we decided foot travel was our best option until Apple maps sorted itself out.

Our hotel, The Breakers Resort, was situated right along the beach and our balcony room at the hotel’s back afforded us perfect views of the water and excellent people watching opportunities. Modest accommodations, the room was improved by a tiny personal jacuzzi. Not built for two, at least not two people of our size, we managed to contort ourselves enough to take advantage of it.

We decided to hit the beach. We found the water to be calm, much calmer than Rehobeth, and the sand to be very smooth and level. We could walk out for what felt like miles before the water was even at waist height. Largely this proved enjoyable—no fighting with the waves or soft stepping around jagged rocks—but it also meant that you had to go very far out before you had a chance at anything approximating swimming. And long before that, an overzealous lifeguard would blow the whistle making you hustle back to shore. Still, we spent many happy hours lazing about, floating on our backs, letting the water lift us and the sun beat down on our upturned faces and kiss our bellies and toes that bobbed above the water. 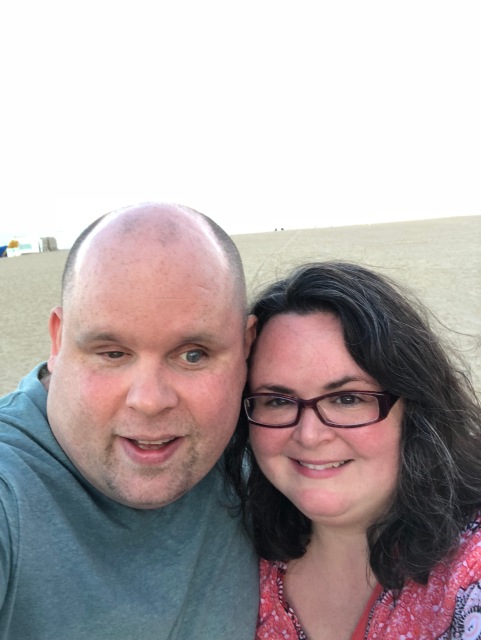 After getting our fill of sun, we walked to The Shack for drinks. The Shack was a large, multipurpose bar/event space and we sat under the tiki themed outdoor bar, trying various flavors of “crushes,” a delicious orange juice, vodka, soda creation I equate with Delaware, but one that VA Beach claims it invented. Whoever invented the drink, locations like The Shack have definitely expanded its contours, making blueberry, passion fruit, and every-other-flavor-under-the-sun crushes made with fresh squeezed juices and flavored vodkas.

Pleasantly buzzed, we made our way to dinner at one of Virginia Beach’s most classic beachside restaurants, Waterman’s Surfside Grill. Our table faced the beach and while we watched the sunset over the water, we enjoyed our first taste of she-crab soup (our first of many) alongside scallops, crab cakes, and shrimp.

We walked back toward the hotel, not yet ready to call it a night. We stopped at a piano bar and restaurant, Il Giardino (so close to my mother’s maiden name, Giordano, that I couldn’t help but like it). Over fruity cocktails and champagne, we saw a wonderfully talented pianist and violinist whose covers of everything from Lionel Richie to Bread entertained us for hours.

Day 2 dawned sunny and bright and full of pollen. Paul’s allergies had worsened overnight and by morning, he could barely breathe. We awoke early to go to brunch at Bay Local Eatery, a very popular restaurant for tourists and locals alike. Since they didn’t take reservations, we thought it best to try and beat the brunch rush and arrive more on the side of breakfast than lunch.

The early start was worth it. The menu featured dish-after-dish we wanted to try and it took many passes before we landed on “Banging Balls,” chargrilled oysters, the Big Country, and the Bay Local.

The crab balls stuffed with parmesan and covered in gooey mozzarella and bacon were perfect savory, salty, cheesy mini-heart attacks waiting to happen. Drizzled with a Sriracha aioli the heat perfectly cut through all the rich, fatty ingredients. The oysters, while enjoyable, were an example in a long-line of DelMarva oysters that didn’t quite hit the spot quite like an East Coast or Louisiana oyster do.

By the time Paul’s breakfast arrived, much like Ozymandias, he looked on it in despair, so full in stomach and stuffy in sinus that he could no longer continue. Not one to let good food go to waste, I ate some of his and part of my own Oysters Rockefeller-inspired eggs benedict, tricking myself that the little bit of greenery from the spinach made my dish healthy.

Around the corner was a record shop, Vinyl Daze. We struggle to find good vinyl shops in NOVA and this shop was the perfect remedy to our problems. Packed with albums of every variety, we purchased classic rock selections we can’t find anywhere else, including Pete Townsend’s Empty Glass with one of our favorites, “Rough Boys.” If this shop opened in Alexandria, we’d be in serious financial trouble.

Finally driven to a point he could no longer stand, Paul begged to go to Target to get some allergy relief. We stocked up on Flonase, Benadryl, and all the usual suspects, hoping they’d provide some assistance.

Fortified with an assortment of drugs, we returned to the hotel to walk the arcade and fun-zone, what we took to calling “Wonder Wharf,” after the beachside attraction on the TV show Bob’s Burgers. Oppressively hot, we wandered for a bit, taking in the games and rides and pondered buying a funnel cake, but the heat radiating from the stand drove us away. How anyone manages to work there during the summer is a feat of superhuman proportions we will never comprehend.

Desperate to cool off, we headed back to the beach to swim, read, and relax.

For dinner, we ventured to Rudee’s Restaurant & Cabana Bar where we split crab balls, she-crab soup, and steamed shrimp coated in Old Bay. The restaurant is a little off the main drag and we decided to Uber there. Next to a quiet inlet, it’s a great spot to avoid some of the beach crowds and sit and relax with a cocktail.

We chose to sit outside in one of the large rocking gliders. Like a rocking chair, you can move the seats back and forth as you eat. A pleasant sensation while sipping drinks, it became less so when we started to eat and I started to fight motion sickness while we dined. We largely used the gliders then, to take temporary respite from the glare of the sun, moving back and forth so we could alternate which of us would be in its harsh, blinding beams.

We returned to The Shack for more crushes and then decided to find music to accompany our cocktails. We took the local trolley, unsure of the route or where to get off. We got off too soon and walked through some questionable parts of town, as we attempted to find live music. This was how we found ourselves at Murphy’s, where we stayed for a few songs, before we decided it was very much not our scene. Fearing another confusing trolley ride, we took an Uber back to the general area of our hotel.

We returned to “Wonder Wharf,” where the cool of the evening meant we could finally try funnel cake. As we walked the streets of VA Beach, we stopped in tacky shops and tourist traps. Killing time in the glare of the neon-street lights we decided to walk for late-night pizza, unsure of our final destination, but hoping Yelp would lead us somewhere good. A few miles down the road, we finally found a tiny non-descript pizza shack and split a slice and some garlic knots. Completely unremarkable, the journey was a good way to see more of the city and walk in the night air, even if some neighborhoods felt a bit sketchy.

We slept in and then made our way to breakfast at the dubiously named Pocahontas Pancake House. A very popular spot, long lines and cramped tables seemed to be their signature. The peculiarly Native American themed decorations, like a totem pole and wigwam in the restaurant’s center, provided visual interest. The food was fairly standard diner fare, except for the fabulously eggy and sweet Belgian Waffle.

Knowing we’d head home the following day, we spent the entire rest of the afternoon swimming, lazing on the beach, and relaxing.

An hour or so before dinner we decided to clean up and walk the main drag, looking for a good spot for drinks. We wound up at the Catch 31 Fish House attached to the Hilton and we had a prime view of the park as they set up for a summer concert. I treated myself to some pre-dinner Bluepoint oysters, my favorite. These were particularly petite and briny and bracingly cold, as they were well chilled on a bed of ice.

We continued on to dinner at seafood-forward Mannino’s Italian Bistro. A theme of this trip, we started with she-crab soup. Far and away the best of the bunch, this soup regularly wins local awards and it’s the addition of the Marsala wine that makes this creamy, but tangy soup shine.

I chose a seafood linguine and Paul had veal francese. The old school trattoria vibe was relaxed and the food was good if unremarkable. Except for the soup—that shit was legendary.

After dinner we walked back to the hotel, stopping for one of Paul’s favorite beach treats, a snow cone. As the sun set and the day turned to night, we sat on our balcony appreciating the water and the cool breeze, a summer shandy in hand, and looking forward to future visits to this fun, not-too-far-from-home beach destination.

This is the end of our weekend in Virginia Beach. Head over to our Travel Page to read more of our travel adventures.