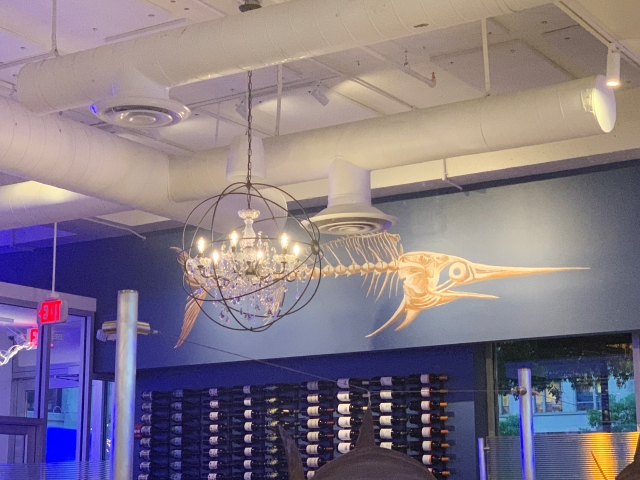 If you’re dining in Alexandria, chances are you’ll be at the mercy of Mike Anderson’s palate. Anderson, of the now defunct “Mango Mike’s,” owns a significant chunk of the Alexandria dining scene. Sweet Fire Donna’s, Holy Cow, Tequila & Taco, Pork Barrel BBQ all fall within his local Homegrown Restaurant Group empire. Each of these fast casual establishments operates to varying success, so when we learned that another Anderson offering was opening down the road from us, we approached it with some apathy.

Whiskey & Oyster in the Carlyle District specializes in seafood and its décor reflects a nautical feel with clean, jaunty blues and whites, oyster shell chandeliers, and prominent fish-and-mermaid-themed art. The space feels deceptively small, given that it seats 100, with its seating segmented into two bars (one liquor, one seafood) and banquettes.

On a Friday night around 8 pm, the restaurant was humming pleasantly, with steady dinner traffic and the sound of the rotating whiskey bottle conveyer that hovers over the bar zipping away in the background. While attentive and friendly, service dragged and it’s clear not all the kinks have been ironed out as drinks and dishes arrived in a staggered and somewhat haphazard fashion. Mike Anderson made the rounds, a gregarious and welcoming figure, charming diners and fostering connection. He insisted he knew Paul, and while inaccurate, it seemed genuine enough to make us second guess if we were, in fact, old buddies who we’d just forgotten had drifted apart.

Dining with friends, we ordered a sizeable chunk of the menu. The men started with Black Manhattans which must have been heavy on the whiskey because both were tipsy before our appetizers arrived. The ladies ordered mocktails and the mix of pineapple, lemon, and Sprite was bubbly and refreshing on a muggy Virginia evening. The eggrolls overflowed with duck, but the spicy kung pao cauliflower stole the show with its delicate peanut coating and subtle kick.

Always longing for the flavors of New Orleans, we ordered the garlic butter grilled oysters. Plump and buttery, they scratched that NOLA itch though they lacked the salt, cheese, and wood smoke of a proper Cajun chargrilled oyster.

We also plowed through an order of lobster bisque poutine fries whose novelty may have been better than their taste; the dish had generous lobster chunks, but lacked enough gooey, melty cheese curds to make it truly memorable.

We hemmed and hawed over entrees, finally landing on the W+O Roast steam pot and the ahi tuna scampi. The ahi tuna arrived pink and glistening in a bed of spaghetti nero and crab. While good, the flavors didn’t pack the garlicky, buttery punch that outstanding scampi delivers.

The W+O Roast made up for any scampi shortcomings. A massive bowl of perfectly cooked lobster, crab, and shrimp floating in a thick, rich tomato broth with undertones of cognac and cream. The love child of gumbo and Seafood Newburg, we immediately saw future nights spent hunkered over steam pots, sopping up the broth with jasmine rice and crusty baguette.

The Hot Morocco steam pot lived up to its name; the burn proved so intolerable that additional rice and bread were required to make it edible. The only complaint with the delicate sea bass was that its tiny portion disappeared in about 30 seconds.

We ended with their beignets. Nothing like a real Café du Monde beignet, the flaky fried dough, like a deep fried Pillsbury Grand biscuit, still provided an enjoyable cap to the meal with its light trace of powdered sugar and tart berry dipping sauce.

Whiskey & Oyster’s proximity, and overall quality, suggest we’ll be back many, many times this summer to linger over cocktails and oysters at the raw bar, or to eat deeply satisfying spoonfuls of seafood studded steam pots.