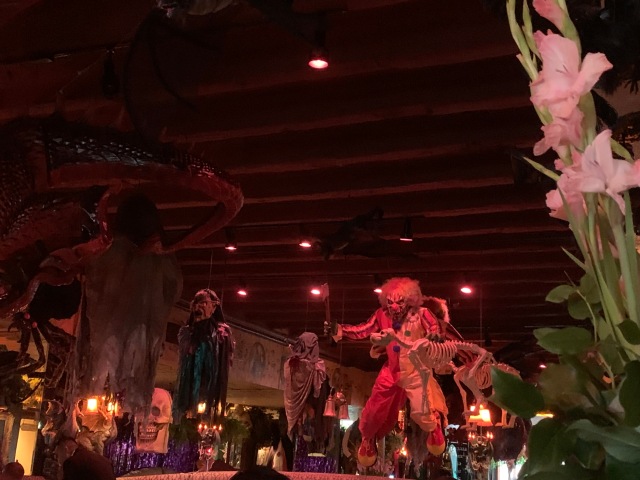 When you live near DC, you realize quickly there are just some dangerous neighborhoods it’s best to avoid. Anacostia. Washington Highlands. Georgetown. You may scoff, but visiting Georgetown isn’t for the faint of heart. Cut off from metro access, impossible parking, hordes of college students. Plus, you know, The Exorcist. I never enter Georgetown without a shuddery presentiment of possible evil, and that’s not just the evil of having to watch Mackenzie scour the sales racks at Lilly Pulitzer.

Georgetown at Halloween is a particularly spooky proposition and Filomena Ristorante leans hard into the spirit of the season. From the giant spiders framing the entrance, to the hideous plastic Igor-esque butler who greets diners descending the stairs to the basement restaurant, the décor is designed to thrill. A ghastly witch guards the table of fresh baked desserts. A werewolf looms menacingly over the bathroom entrance. Surprisingly, the decision to buy out the local Halloween Spirit store works surprisingly well when combined with the late 80s/90s kitschy décor of elaborate florals, hurricane lamps, and chintzy white lace table settings. All of which I remember from my grandmother’s Italian-American household.

But, while charming, the Halloween fare’s not the main attraction. That’s the Pasta Mamas. Like powerful, skilled witches tending their simmering brew, Filomena’s Pasta Mamas are a coven of women, doing the (un)holy work of magicking up delicious penne, rigatoni, and spaghetti, using the kitchen hearth to boil cauldrons of bubbling salted water. Their curse? The human stomach can only hold so much pasta before it explodes.

We began with the antipasti misti for two. Heaped with items like prosciutto, mortadella, Parmesan, olives, and artichokes, it proved the perfect accompaniment to the fresh baked focaccia topped with roasted tomatoes and basil. The tiny sweet peppers stuffed with cheese and prosciutto were my standout. The tang and spice of the pepper played perfectly with the fatty richness of the protein. We threw up the white flag after finishing about a third of the platter, knowing more food was to come. Attentive to a fault, our waiter asked if we’d like to wrap up our leftovers. We let him know after the appetizer that we’d be seeing a show and didn’t want them to spoil, but he diligently asked after every course just to be safe.

For mains, Paul had the potato gnocchi with Bolognese. Though airy and light without any gummy aftertaste, the gnocchi were enormous golf-ball sized portions that rapidly expanded in the stomach, no matter their light texture. The Bolognese was one of the few missteps of the evening with its meat ground so fine it lacked texture and the sauce being cloyingly sweet.

My rigatoni with vodka sauce made up for the so-so gnocchi, each bite perfectly toothsome with a rich sauce clinging to the pasta ridges. The veal saltimbocca drowned in its white wine sauce and all traces of sage and prosciutto were lost, though the cook on the veal was sufficiently tender.

After mains, our friendly waiter brought us two decanters. One of amaretto and one of Sambuca. He explained the tradition of having a shot at the end of the meal. He instructed us to float 3 coffee beans in the liquid of our choice in order to bring good health and fortune. 2019’s been a year somewhat devoid of good health and fortune, so we made sure to pick our beans carefully and down our shots before enjoying our desserts.

A chocoholic’s dream of moist chocolate cake and thick chocolate ganache, Paul’s chocolate truffle cake defined #chocolategoals. Despite being so full from dinner that he wished Filomena featured other old Roman traditions like a vomitorium, he tore through ninety percent of the cake.

At the encouragement of a friend, I ordered the cannoli. I did not anticipate how delicious, or how big, it would be. Rather than the typical single shell stuffed with ricotta, this behemoth featured THREE layers of shell, each with its own thick coating of sweet ricotta cream, chocolate chips, and pistachios. To be fair, my friend warned me to fast. But she’s thin and waiflike and I’m sturdy and chunky, so I just figured I could handle the gluttony a lot better than she could. But, dammit, she was right. The cannoli proved the highlight of my evening and I just wish I’d left a bit more room to enjoy it fully.

If you find yourself at Filomena, remember “The power of Christ compels you…to eat more cannoli!”